The Medieval Streets and Modern Roads of England

How Many Roads Are in the City of London?

Can you guess how many roads there are in the City of London?

The City of London is the historic financial district of London. The city's boundary is marked in black on the map on the left. This boundary is partly defined by the old Roman walls. In fact the City is the historic heart of London - which began with the arrival of the Romans and their settlement by the Thames in the 1st century AD. What we now think of London has obviously grown far beyond the original City's borders and the City of London is now only a tiny part of the vast metropolis of Greater London.

How many roads do you think lie within that black border encompassing the City of London?

The answer is NONE.
Because there are no roads in London.

There are however a lot of streets, alleys and lanes. The reason that there are no streets called 'road' in the City of London is because the use of the word 'road' to indicate a byway did not emerge until the late 16th Century - a long time after most of the roads in the City of London were established and named.

The historical emergence of the use of Road as a name for streets in the late 16th Century can be observed in the road maps of most Englsh towns and cities. Streets which were established before the 16th century are very unlikely to be called Road. Coversely parts of towns and cities which were built after the 16th Century are likely (on this map) to have a lot of blue streets - called Road.

On this map all roads which are called Street are coloured red. All streets called Road are coloured blue. Roads with other suffixes are coloured grey (Avenue, Lane, Close etc).

Now we've zoomed out on the map of London we can clearly see that the medieval centre of the city is dominated by red roads called Street. However in the newer parts of London, in the areas which mostly emerged after the 16th Century, there are far more blue streets which are called Road.

This pattern is repeated in towns and cities across the UK. Here is Birmingham, the UK's second largest city. Despite extensive bombing by the Germans in the Second World War, and the extensive redevelopment of the city after the war, the centre of the city retains a road network which still owes much to the city's medieval past. Around Birmingham New Street Station, in the historic centre of the city, there are very few streets called Road (coloured blue) and lots of Streets (coloured red).

Once we zoom out on the map we can see that when Birmingham expanded during the industrial revolution there were lots of Roads built. In these more modern parts of the city there are far fewer red Streets.

This pattern isn't only found in England. It can be observed in Scottish cities too. For example the centre of Glasgow, on either side of the River Clyde is dominated by red Streets. As you move further from the centre of the city there are far more Roads than there are Streets.

After World War II the UK began building a number of new towns. These new towns often have very few roads named Street. For example of the hundreds of roads in the new town of Crawley only five of them are named as streets: 'High Street', 'Church Street', 'West Street', 'New Street' and 'Ifield Street'. All five of these Streets existed before the new town of Crawley was built and can be found on the 1896 Ordnance Survey Map of the area. All five of the Streets in Crawley therefore pre-date 1800.

While there only five roads named Street in Crawley, there are lots of streets named Road. It appears that the Crawley town planners had a real dislike for the suffix Street.

The town of Bournemouth, on the south coast of England, was founded in 1810 by Lewis Tregonwell. Before the town was built the area was mostly deserted heathland with very few existing roads. A search for roads called Street in Bournemouth returns one result - 'Orchard Street'. So in this town, built entirely after 1800, there is only one road called Street. Conversely there are lots of Roads.

Cities and towns in the UK which grew from medieval towns and villages seem to have centres with lots of Streets. Towns which were built after 1800, and haven't evolved from existing medieval villages and towns, appear to have very few roads which end in the name Street. It seems that after 1800 calling roads Street became very unpopular in the UK. 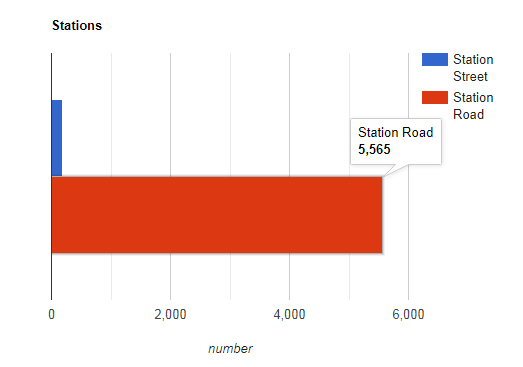 I believe that since the word Road came into use after the Seventeenth Century the word Street largely went out of fashion when naming new roads. We can partly test this theory by looking at the number of 'Station Roads' and 'Station Streets' in the UK. The first railway station in the world was built in 1807. It is very unlikely that there were many 'Station Roads' or 'Station Streets' before this time. If my theory that the word Street went out of fashion around 1800 is actually correct we should find very few Stations Streets and many more Station Roads in the UK.

You can explore the distribution of Streets and Roads in UK towns and cities by using the search box on the map.


Erratum - Roads are coloured red on this map when they have 'St' in their name on OpenStreetMap. This means that most roads named 'St' will be mistakenly coloured red.

You can read more about this map and how it was made on Maps Mania.